(Bloomberg) — The European Union is taking a major step to regulate crypto assets in the bloc, seeking to protect its financial markets without depriving citizens and companies of the new technologies. Load Error Under the initiative unveiled on Thursday the EU’s executive arm seeks to establish clear ground rules […]

(Bloomberg) — The European Union is taking a major step to regulate crypto assets in the bloc, seeking to protect its financial markets without depriving citizens and companies of the new technologies.

Under the initiative unveiled on Thursday the EU’s executive arm seeks to establish clear ground rules for cryptocurrencies, which often aren’t captured by traditional rules and can leave investors without protection.

The proposal, considered one of the most comprehensive anywhere, also seeks to regulate so-called stablecoins such as Facebook Inc.’s Libra, which has been treated as a wake-up call by regulators because it could potentially reach a large number of users and even threaten financial stability.

“We should embrace the digital transformation proactively, while mitigating any potential risks,” said Valdis Dombrovskis, an executive vice president of the European Commission, in a statement. “An innovative digital single market for finance will benefit Europeans and will be key to Europe’s economic recovery by offering better financial products for consumers and opening up new funding channels for companies.”

Under the new rules, crypto firms like trading platforms would need a physical presence in the EU and become subject to capital requirements, the commission said. The most important stablecoins would be supervised by the European Banking Authority.

Finance ministers from the bloc’s largest economies this month renewed their call for strict controls of projects such as Libra.

The proposal now faces a debate between the European Parliament and national governments before it becomes law. The commission said it plans to have a framework for crypto assets in place by 2024.

The supervision of emerging types of financial firms has come into the public spotlight after the spectacular collapse of Germany’s Wirecard AG, a payments firm that was classified as a technology company and thus operated under less strict oversight than traditional lenders.

As part of a new push to develop the EU’s fragmented capital markets, also unveiled on Thursday, the commission is now planning to assess whether existing regulations for that industry work as intended and are applied by national authorities as they should.

“Truly integrated and convergent supervision is needed to ensure a genuine level-playing field for all market players,” it said in its latest action plan on how to develop the so-called capital markets union project. “This will be particularly relevant in a post-Brexit world with multiple financial centres across the EU.”

More harmonized supervision has been a thorny subject for national governments however. They significantly scaled back a 2017 proposal by the commission to beef up supervisors at the European level, preferring to keep more of the power within their borders.

That approach was put into question however when the Wirecard case revealed significant shortcomings in Germany, triggering reforms in the country and a probe by the EU’s markets supervisor. The commission said it would need to wait for the results of the investigation before taking more concrete steps.

For more articles like this, please visit us at bloomberg.com

Mon Sep 28 , 2020
“This supports the ability to really address all of the issues a person is a facing,” said Bruce Buckley, CEO of Soldier On, which runs similar facilities in Agawam, Chicopee, Northampton, and Pittsfield. “If you address most but not all of them, we’ve found, it doesn’t really provide a working […] 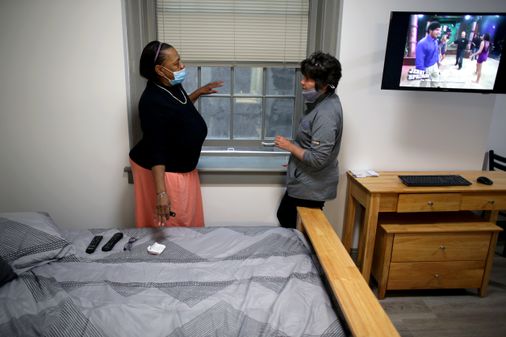